Let us CUSTOMIZE the MIX that works best for YOU! 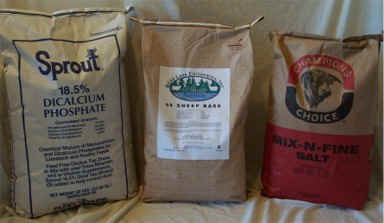 One bag of bk Sheep Base will feed approximately 20-25 ewes for six months.

bk Sheep Nutrition Services is a unique program to sheep producers.  It allows you to have mineral mixes formulated to your sheep’s needs, not to what a company puts in a bag.

I will provide your sheep the best possible nutrition by balancing rations based on your feeds using bk Sheep vitamin and trace mineral packages.  I will calculate your feed and mineral cost of your current diet and compare that to what I would recommend.  Many times I have saved producers money while increasing the vitamin and trace mineral levels in the sheep’s diet.

I can also custom design grain and protein mixes using local products available to you, to meet the growth needs you expect of your lambs and production of your ewes.

By purchasing bk Sheep products, you will also receive nutritional advise and accurately balanced rations.  This will improve your flock’s health and performance while increasing your profitability.

I have designed this program to be practical and profitable to use.

Begin with forage samples from your hay or pasture.
Accurate forage tests are used to properly balance the mineral mix and recommended ration for your animals.  Since feeds will vary from farm to farm, both locally and geographically, there is no way a company’s one or two products can meet the needs accurately for many sheep over such a wide area. Forage samples will give you a history of how your feeds vary in time.

Once I have received your forage samples from the lab, I will:
– Balance your sheep’s ration for the stage of production and body weight
– Recommend grain & protein needs
– Recommend what you will need to  mix for a mineral blend using bk Sheep Base
– Recommend the consumption rate of what this mineral mix should be.

All rations will give a complete printout of trace mineral levels.
I concentrated on providing the legal limit of selenium and feeding higher levels of vitamin E.  I will balance to insure a proper copper to molybdenum ration to help prevent copper toxicity.  Other micro nutrients of concern will be zinc, cobalt and iodine levels.  When comparing for the first time, I can show you how a custom blended mineral mix designed by me would compare to what your sheep are receiving now.  You will know all vitamin and trace mineral levels.  I do not hide information from my customers.

These products do not have any added copper.

Commercial sheep mineral mixes were not properly formulated for our forage-based system. Bill helped us develop custom mineral mixes to match the nutrient needs of each management group in our accelerated lambing flock.

“I asked Bill for help when my sheep started dying from copper poisoning while on a major name brand commercial mineral.  It turns out the one batch fits all approach used by the mega company did not work for us on our unique high copper, low molybdenum soils.  Bill custom designed a program for me that solved the problem *and* improved the performance of our sheep.”

“Having separate flexible mixes for different groups of sheep makes more sense than feeding only one kind of mineral to all sheep.  The mixes Bill puts together with bk Sheep Base II has greatly increased the Vitamin E level to our sheep.  It’s nice to know that someone is there to support their products with nutritional knowledge instead of buying a product that may not even be right and that has little nutritional support.”

“It was surprising to see the differences in the forage analysis of our permanent pasture forage versus hay harvested from our cropped acres.  With a prepackaged sheep mineral you are feeding for some average determined by that feed company.  They do not take into regard your local soil conditions and management.  With a company’s prepackaged mineral you are overfeeding or under feeding, it is simply not balanced to the sheep requirements all the time.  As we push our prolific ewes harder to raise triplets and quads, I like to be able to adjust the mineral mix to better meet the ewe and lamb’s production requirements.  Bill has allowed me to do this with the best opportunity to perform to their potential.”

“Bill’s mineral mixes are crucial to our success with our rare breed, entirely forage/pasture/hay raised and finished flock of sheep. Our soils are very high in molybdenum and our sheep also seem to need more copper than other breeds. We also have high salts in our forage and water so we have had to adapt the mix to get the sheep to actually eat what they need. With accurate forage analysis and a custom mix we have seen increased live lambing rates, better flock health and improved performance. We combine the custom mineral program with regular testing of slaughter sheep liver mineral levels to ensure that we are really keeping our sheep in the proper level.”

Nutritionist works to practice what he preaches

MANAWA – With a UW-Madison degree and nearly 20 years of livestock nutrition experience, Bill Keough is putting his knowledge to work on his own small herd of Dorset sheep.

“I guess, basically, I try to practice what I preach. Not many nutritionists actually raise animals and feed animals,” he told a group of sheep raisers Sept. 13 at a pasture walk he hosted at his Cedar Lane Dorsets facility.

Mr. Keough chose Dorset sheep when he was 13 years old and showed them in 4-H and FFA before selling the flock. 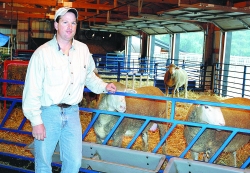 “I went 19 years without them,” he said. “It’s been a burr up my rear for 19 years. I just wanted them back. It’s in the blood.”
In 2004, he and a friend built and outfitted a pole barn for sheep handling and began fencing 7 of his 20 acres for intensive rotational grazing. The flock came a year later.
Mr. Keough set a goal for his herd right at the start: He expects about a third of the lambs to be show and breeding quality, but the other two-thirds still have to excel as meat animals.

He’s using his experience with nutrition to help meet that goal.
“With me, what I’m trying to do is maximize their growth for their genetics,” Mr. Keough said.”

He uses sedars and prostaglandin to breed his ewes out of season so he has lambs ready for shows and sales in March.

“With the registered Dorsets, fall-born lambs are a premium. Plus, it’s nicer lambing in S

Lambs are put on creep feed immediately and are fed the same ration whether they are destined for meat or show. They are weaned between 45 and 72 days.eptember than January,” he said.

“In other words, right after or before deer hunting,” he quipped.

Most sheep raisers keep their lambs on the ewes while they’re on pasture during the summer. They don’t start feeding grain until fall weaning.

“They start thinking about grain after mine are gone and sold,” he said. He consistently has ram lambs at 140 pounds in less than 4 months.

At that age, show, sale and replacement prospects are set aside, and the meat lambs are sold directly to customers as locker lambs. He said his primary advertising is word of mouth, but he’s just put together a flier with tear-off telephone numbers to be put up at the local feed mill and other outlets.

He charges a carcass price of $2.65 a pound and in the flier includes comparisons with grocery store lamb prices. His price is less than $5 a pound for finished lamb, and two-thirds of the cuts would be $10 to $12 a pound in the supermarket.

Mr. Keough said he can make a profit with meat if his ewes produce twins, but he will take the profit wherever he can get it.

“My first emphasis is on the show and sales, but if I can make more money selling direct … ,” he said. “My goal next year is to break even on the whole thing. Considering that will only be my true third year, that’s pretty aggressive.”

Mr. Keough said he doesn’t worry about spending a little extra money to feed his meat lambs because he doesn’t have a lot of them – maybe 17 a year. He still tracks every penny, so he knows his costs.

When planning a ration for his customers, his goal is to tailor the plan to the individual and offer options that will grow the animals most efficiently.

He said the result depends on the farmer. All the fine-tuning in

“In other words, if you are feeding sheep and their environment is crappy, it doesn’t matter what you feed them. The best gains are going to be by the best managers,” he said.the world won’t improve feed efficiency if a sheep raiser takes shortcuts in management practices.

“Shortcuts don’t make you money. People who take shortcuts aren’t going to be as profitable,” he said.

With sheep, he said that could be something as basic as compromising the lambs’ growth by choosing one feed for all stages of growth.

“My lambs go through seven different diets before they’re 9 months old,” Mr. Keough said. “I’m always changing that diet for the next stage of growth.”

Mr. Keough is also planning his farm for its next stage of growth. He wants to set up irrigation on his pastures with hopes of extending from 100 days to 200 days of grazing for the ewes.

“If I can have the irrigated pasture, I am looking at rotating every two days (through) what would be a quarter-acre,” he said. “This is my plan. Reality can always be different.”

If his grass-hay supply holds until he can make better use of pastures, he can reduce that cost from $5,000 to $2,000 annually.

Barn space is at a premium for his 32 head, but he said a second barn would allow him to accelerate breeding so he has spring lambs for replacement. He plans to build to 40 brood ewes.